CULTIVATION: The first step in our rooibos production process is cultivating the seedlings, which usually happens around February every year. By July/August the seedlings are ready to be planted in the field, and under normal conditions these plants have an average lifespan of 5 to 6 years.

HARVESTING: Once the seedlings are planted, the first yield is generally harvested after 18 months, from mid-January to mid-April, and annually thereafter. The plant with needle-like leaves is cut and collected and taken to the drying area for further processing.

FERMENTATION: At the drying area the plant material is chopped into 2 to 3 millimeter cutlets, which are then moistened and bruised to enhance the fermentation process, and left in a fermentation heap for roughly 12 hours. During fermentation the unique enzymes react in such a way that the physical colour of the material changes from green to the red – hence the name “Rooibos”.

AROMA & COLOUR: The aroma and colour of the tea can alternate from one batch to the next, and is largely influenced by the soil, the climate and the way the tea was made. What’s more, every tea producer has his or her own fermentation technique which can also influence the colour and aroma of the end product.

DRYING: After fermentation the tea leaves are spread evenly over a drying lane and left to dry in natural sunlight. When the moisture content of the rooibos reaches 10% or less, the tea is collected, bagged and stored in bulk until further processing.

PROCESSING: To separate the tea leaves from course material and dust, the tea is carefully sifted. The coarse materials are used to make lower grade rooibos, like milled rooibos, and the rooibos dust can be used as an extract in beauty and home products. Next the rooibos is sterilised with steam to remove bacteria, before the tea is dried once more.

QUALITY CONTROL: To ensure that the tea is up to standard and meets all mandatory regulations, it is tested and approved by the relevant authorities. The final product is now ready to be packed into sachets, before it is ready for distribution. 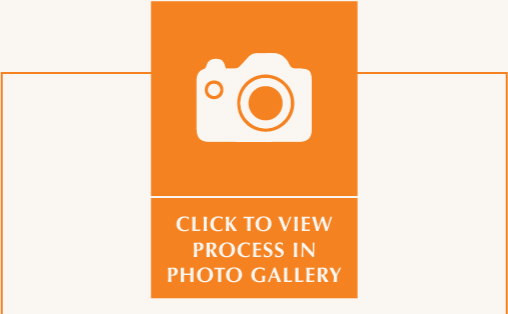 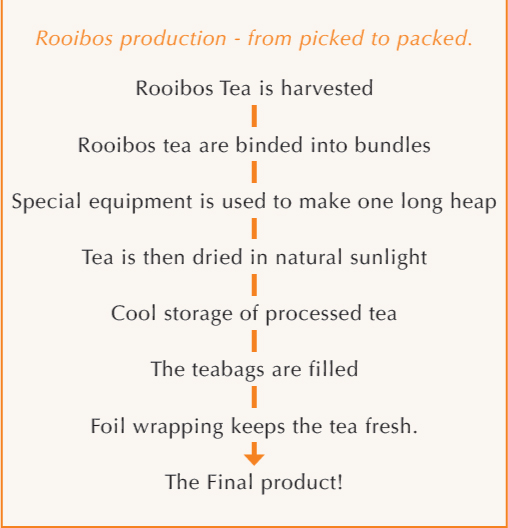